Skip to content
The sources of hydraulic oil contaminants are diverse. It has two paths: external invasion and internal generation

Residue pollution:mainly refers to the sand, iron filings, abrasives, welding slag, rust flakes, grease, cotton yarn, and dust brought in during the manufacturing, storage, transportation, installation, and maintenance of hydraulic components, pipelines, and fuel tanks. Although it has been clean, the hydraulic oil is pollute by the residues left after it has not been clean. When the hydraulic oil is stored, the nozzle of the respirator of the fuel tank is not tightly covered, and dust, rainwater, and air are intrude. Moisture in the air penetrates. When filling hydraulic oil, because the filling container is not clean, the oil pipeline will be mixed with dust and other impurities; 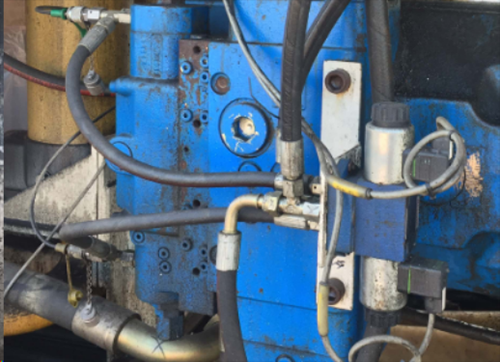 2.Impurities are mix in during the maintenance, disassembly, and loading process.

Product pollution: mainly refers to the impact and wear of the hydraulic transmission system during the working process. The generated metal particles. sealing material wear particles. paint peeling pieces. air bubbles. moisture and the jelly after the deterioration of the hydraulic oil are cause by hydraulic pressure. Oil contamination. Siemens’ experimental report pointed out that 90% of the failures caused by oil pollution are caused by wear debris particles generated by wear.
In addition, the oil will oxidize at high temperatures. The oil temperature is normal when the oil temperature is 140-180 degrees Fahrenheit. If the oil temperature rises again, the oxidation rate of the oil will increase. For every 10 ℃ increase in the oil temperature, the oxidation rate of the oil will double. The oxidation of hydraulic oil will generate sludge. (jelly) or impurities in hydraulic oil.
These particulate contaminants are like abrasives used when grinding metal surfaces. They are distribute throughout the hydraulic system with the circulating flow of hydraulic oil. When passing through the hydraulic oil pump, transmission mechanism, valve parts, and other hydraulic components, the wear of each friction pair will be aggravated. At the same time, new pollution particles are produced. creating a vicious circle and advancing the failure period. Significantly reduces the service life of components. Serious threat to the normal work of the hydraulic system.
Air bubbles, moisture, oil decomposition residues, surface-active media, etc. mixed into the hydraulic oil will corrode various components in the system. And make the dirt on the surface of the component dispersed into the oil and difficult to remove. It also reduces the ability of the filter to adhere to dirt. Often the orifice is blocked, and the electromagnetic reversing valve is stuck. Failure of hydraulic components can cause accidental failures.

3. What are the hydraulic oil pollutants that can be prevented？

From the analysis of the source of hydraulic oil pollutants. the probability of preventing the intrusion of external impurities is relatively large. As long as the preventive measures are strong. the prevention rate can almost technically reach more than 95%. However, it is difficult to control the pollution of internal products. because the production of products is inevitable. during the operation of the system. and it is impossible to achieve zero wear and zero oxidation technically. Only micro-wear and micro-oxidation can be achieved. So, the pollution of hydraulic oil is bound to occur, which is inevitable. Zero pollution to running machines is impossible. But, because of the diversity of sources of pollutants. various measures should be taken accordingly. It can achieve low pollution. It improves the working stability of the system and prolongs the service life.

Adopt Yateks online oil condition monitoring system and oil analysis equipment. It can quickly and accurately analyze the source of hydraulic oil pollution and the cause of pollution. It can remind timely maintenance of equipment and reduce the loss caused by downtime.