Yateks P, N, M series sell well in the European market this year, for Yateks are always on the way of innovation. Engineers have made fruitful achievements in the first half year of 2017.

Based on P series, Yateks has developed another three types:
1.high brightness up to 10,000lux, which can meet the demands for a very dark environment
2.interchangeable lens, which can satisfy different working conditions without changing the probe or whole unit, greatly reducing clients’ cost.
3.dual camera applied on 6mm probe diameter, which can be switched to check more carefully and subtly.

Based on N series, Yateks have developed N-digital series, which can realize the function of text editing and customized demands. And different modes of adjustment function is so splendid to achieve the best image effect and color revivification! If added our best lens, the pixels can reach 1,000,000!

M series endoscope is a newly released portable endoscope type in June this year. With mechanical control design, lightweight size, 360-degree articulation, and clear image, it is well-received in the market for its excellent performance and cost-effective price. It has been batch ordered by our European and US distributors in the past months. What’s more, based on M series, engineers have developed M-IR series, which can be used to detect 10m&20m distance in the totally dark environment. M-IR series endoscope borescope camera is very well welcomed in police and security market for its amazing performance! 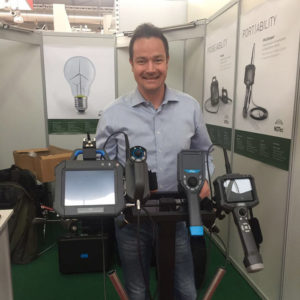 With Yateks splendid endoscopes of the above series, NDTec has achieved good feedback from this exhibition and got many orders, congratulations! Hope Yateks and NDTec can cooperate better to support each other to work for the career and have greater success for both sides!